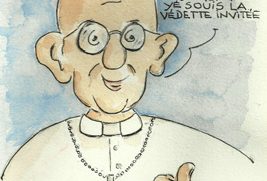 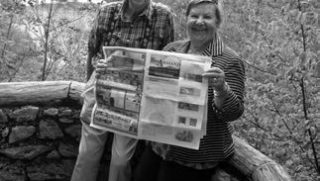 ... with Mr & Mrs Ernest Gasser (from Pike River), at the Plitvice Lakes (Croatia) 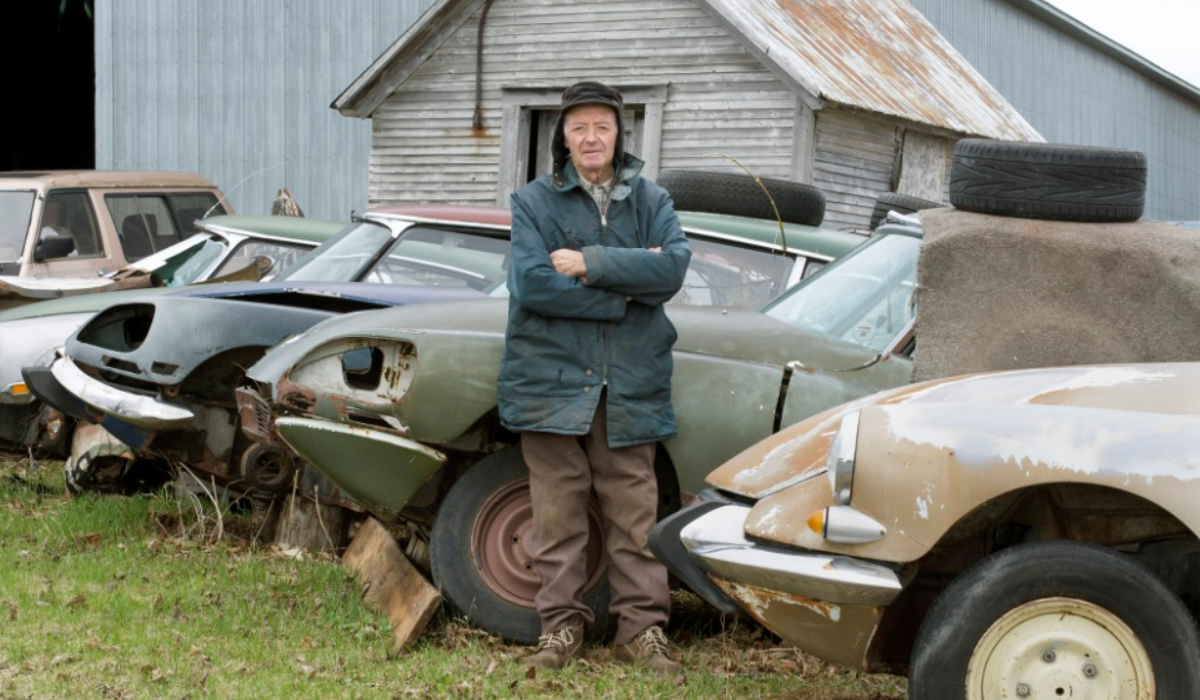 In the middle of a southern Quebec cornfield sits one man’s automobile Shangri-La, his personal auto-oasis ; a Citroën car graveyard. It is a place where few car enthusiasts visit, being set back from the main road in the heart of Quebec’s agricultural zone, but it has a strong following of Citroën disciples who consider it akin to an automobile Mecca.

Here, amidst the lines of rusting wreckage and eye-popping car treasures, rows of dusty headlight glass covers and faded fenders line the wall of the barn, like scales on a fish. In the surrounding fields, migrating Canada geese land in the stubble of the surrounding corn fields, scratching up a few kernels to feed their long distance hunger, while in the distance, fields are being tilled into neat, regimented rows. 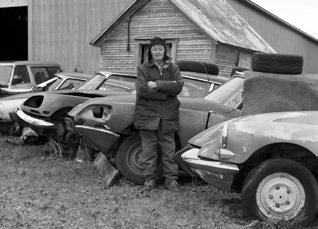 Inside the farm’s barn there are no plows, no tractors or grain bags as one might imagine ; instead, there are boxes of headlamps, hampers full of side mirrors, clusters of steering assemblies, hydro-pneumatic suspension systems and more windshields stacked like a glass layer cake. Overhead in the rafters, chrome bumpers line the ceiling.

The barn resembles a cavernous Citroën operating room, complete with the sobering musk of oil, grease and gasoline on a dirt-covered floor. A loving marmalade barn cat follows the visitor everywhere, like an amorous security guard.

This is the farm of Citroën car enthusiast, André Menard a 72-year-old grain farmer and collector of Citroën automobiles and parts. Menard has pursued his passion for the famous French-made car for over 50 years, picking up a car here and there and being given old and broken cars in various stages of disarray.

“Some Citroën owners would rather give away their old car than send it to the wreckers to get crushed. They are sentimental about them. Other people will offer their car to me and ask for a huge price ; (he said with a muffled chuckle) but it’s not worth paying a lot as I don’t make a lot. It’s for pleasure ; not for profit. It’s not really a business. It’s a passion,” explained the soft-spoken farmer. 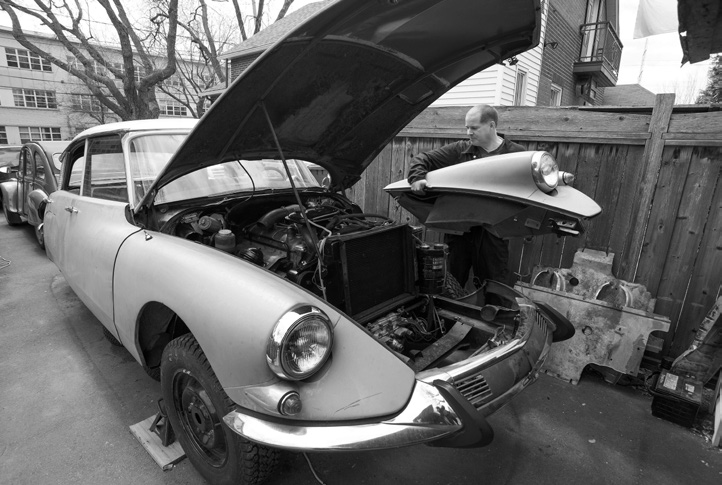 Menard’s collecting started in 1962. “I did some snow clearing with my tractor for a neighbour and he gave me an old Citroën. That was the first I owned. I now have around 60 cars, in and outside the barn,” he explained. “Anytime I met anyone interested in Citroëns, they would put the word out to anyone wanting to get rid of their Citroën. Here is the result,” he said with a sweep of his hand.

He supports his collecting habit by selling parts to collectors and restorers, by telephone. But he has no website, no e-mail address.

As a young boy, Menard liked building go-carts with washing machine engines and other contraptions. He was always fiddling with some mechanized buggy of some sort. “When I was a young boy of 14 I took the engine out of an old motorcycle and bolted it onto a sleigh body. It had a similar look to one of those Everglades air boats.”

It is about an hour’s drive from where Menard lives in Bedford to Valcourt, Quebec, where Joseph Bombardier built the world’s first snowmobile in his repair shop in 1937. Bombardier was also a tinkerer like Menard.

“There are some other makes here in the yard, like the 3 NSU Prinz’s, given to me by my brother, and a Toyota van. But it’s mostly Citroëns.” 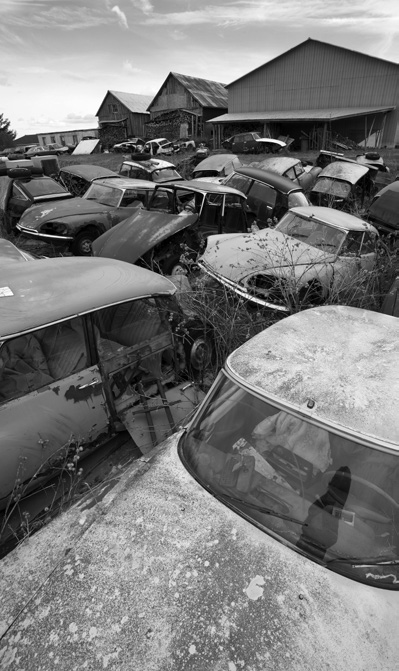 The fate of the Citroën (the first mass produced car outside of the U.S.) was sealed in North America in the 1970’s, when the U.S. government brought in strict new standards for all car manufacturers. At the same time, the EPA introduced new environmental rules ; then there was the oil crisis of the mid-seventies. These changes spelled doom on this continent for the visionary car maker. It was forced to withdraw from the North American car market in 1972-4, rather than be forced to adapt to the new design regulations that outlawed core features of Citroën cars that made them so unique.

Some of the features that made the Citroën a one-of-a-kind automobile include directional or swiveling headlights that turn with the steering, (providing better visibility in corners) ; height-adjustable hydro-pneumatic suspension, variable-assist power steering and its energy absorbing impact capability in case of an accident. (They manufactured the first mass produced front-wheel drive, steel unitary body vehicle ; the Traction Avant). These features, now common in modern cars (except for the hydraulic suspension), were first introduced by Citroën decades ago.

“There were too many regulations against the Citroën. It couldn’t survive,” stated Menard.

But the love of the Citroën make still enthralls car collectors and restorers. Montreal Citroën owner and enthusiast Marc Desrosiers is one such owner. He described how, “In 2000 I was buying a used Isuzu from a guy and noticed a strange looking car in the back of his garage. The style interested me and remained with me.”

Desrosiers bought his first Citroën, a Dyan, in 2002. Then in the summer of 2014 he bought a 1966 Citroën ID 19 from Menard and has been restoring it in his Montreal garage ever since.

Desrosiers hopes to have his ID on the road by the start of summer, with the help of some parts from his friend Menard. The 43-year-old electrical engineer says that besides being a victim of changing standards, “The Europeans were producing smaller cars while the American market was asking for gas guzzling muscle cars,” explained Desrosiers. 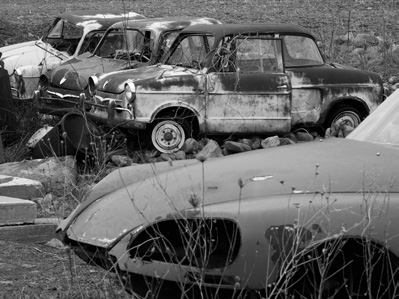 “It really was ahead of its time. You can compare the Citroën with the Tesla for the level of change it brought to the automotive industry. And, it is a really nice car to drive and be a passenger in ; very comfortable.”

George Dyke of CITROENVIE ; a community of Citroën enthusiasts with a passion for Citroën automobiles, based in Brampton says that, “In Ontario we have a couple of Citroen yards or dumps, but not like Mernard’s. He is one of the very few who still works on the vehicles and has lots of parts available. He is well-known amongst Canada’s, and U.S. Citroen owners and collectors.”

The smiling, humble Menard confessed that after all these years he still doesn’t quite understand his attraction to the Citroën. “It’s my passion ! I just love them. Why ; I don’t know ?”