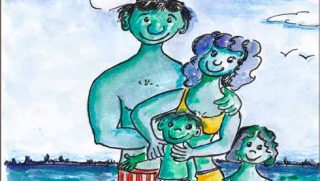 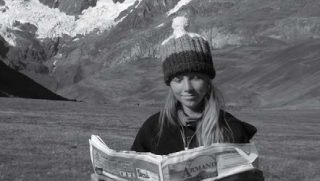 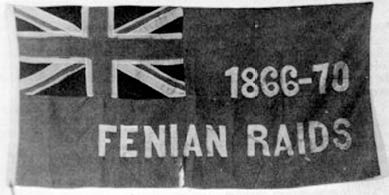 Flag of Red Ensign with the word « Fenians Raids 1866-70 » crudely stiched onto it. (source : Manitoba museum)

This village of 25 houses looks out over the farmlands of Quebec to the north and the hills of Vermont to the south.  Just 3.2 kilometres/2 miles from the border and 80 kilometres\50 miles from both Montreal and Burlington, Pigeon Hill’s houses and church have been here for over 150 years.  The village was originally called Sagerfield to honor the Sager family.  Adam Sager arrived in the region in 1791.  He died in 1825, having been struck by lightning. The great number of carrier pigeons who stopped on their journey between Montreal and Boston, and some say who saved the first settlers from starvation, prompted the name change to Pigeon Hill. Noah Sager, the youngest son of Adam, was the proprietor of the Frontier Hotel opened in 1803 by John Martin. The hotel became the first post office established on the hill in 1851.  The first general store at Sagerfield was opened in 1810 by Peter Yeager, who ran the business for 2-3 years.  His successor was Addi Vincent, whose sons closed the store in 1815.  Some years later, next to the church, Gath Holt started another business which was destroyed 3-4 years later when a barrel of powder exploded.  Abel Adams then ran a business in the village for 30 years. In 1866, Pigeon Hill folks hid in their houses and basements of three-foot-thick walls during the invasion from the United States into Canada by Irish-American revolutionaries, known as the Fenian Brotherhood, whose mission was to obtain Irish independence from England. Unfortunately this raid took one innocent victim on Eccles Hill.  On June 10th, Margaret Vincent, who could not hear or speak, was out getting water when a sentry called to her to stop – or be shot.  After this sad event, the Canadian Home Guards, composed of soldiers retired or waiting to be called up, were brought to the area under the command of Captain Asa Westover of Dunham.

In the next articles, I will bring you with me in one of my walks through the village and tell you what I’ve learned about houses and people of this place.