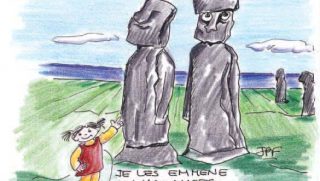 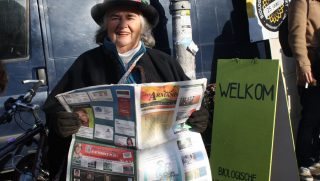 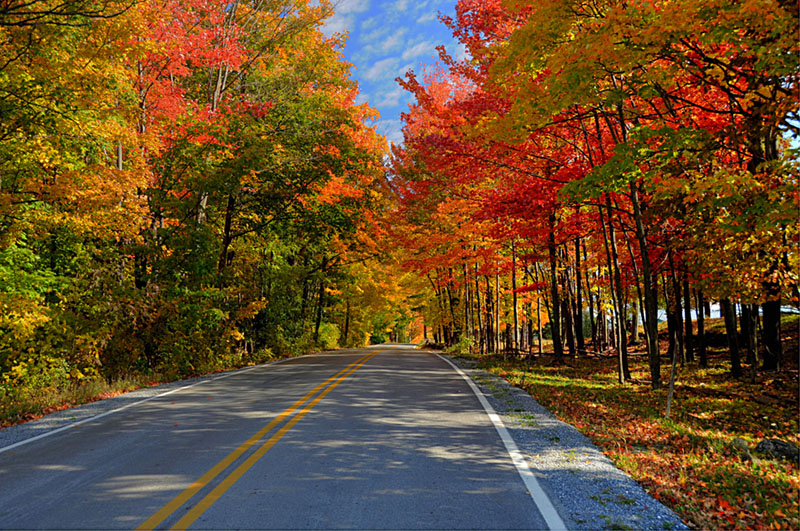 As promised in the last issue, I am bringing you with me in one of my walks through the village, telling you what I’ve learned about houses and people of this place.

In the centre of the village is the church, Saint James the Less, a Historic landmark built in 1859, still without electricity.  The Christmas Eve service with oil lamps draws people home to the village from all over.  Folks also choose this church as a prime location for weddings. Fifty feet up the road from the church, in a westerly direction is The Poterie which draws people from as far away as the southern United States, western Canada\USA, Europe and Asia.  Sara and Michel (35 year residents) give courses during the summertime as well as welcome visitors to their workshop and gardens.

The land in back of the pottery is part of the land sanctuary, Cercle pour la paix, owned by 4 families and cared for by many loving hands : Mike and Astrid, Ananda, Mikala, Alida, José, Emanuel, Khalil, Elijah, Mary Lee, Jerry, Yael, Jonah, Rosemary and Patrick.  If you check out Pigeon Hill (Saint Armand) on internet maps, you will see the Tree Labyrinth created on this 47 acres of forest, gardens, pond and retreat shacks.

Across St. Armand Rd, Bette (5th black belt) and Lynne live in the old Harrison house (1949).  They have made it into a little gem.  Bette’s ‘Pigeon Hill Boogie” happens there every summer on 4th Saturday of June.  Saturday mornings folks also gather for Taekwondo classes, a Korean traditional martial art.

If you walk west up Chemin Saint-Armand, just past Bette and Lynne’s, you can pick up some fresh garlic directly from Christian’s farm (formerly the Martin farm).  Martins still live in the family homestead just across the road. Lloyd (now deceased) not only plowed his field on a small tractor, he was the John Deere representative and cleared the roads in the winter on a horse drawn plow. Lois made great flapjacks and always had a “cup of” for a guest who just dropped in. You will see two old Gulf gas pumps (much photographed) in front of the Martin garage, now Dean’s workshop. Continuing on in Westerly direction you get a glimpse around the corner of Guthrie Road, of  the beautiful gardens Jeanine Carreau and Pierre Gauvreau lovingly built over the 27 years they have been in Pigeon Hill. This is where Pierre now lies, under an oak tree.

On the other side of Guthrie Road, Lorraine and Alain are doing a great job keeping up the Ross’s beautiful red brick home with all its interesting gingerbread trim. Mrs. Waverly Ross gave lovely teas there and traversed the village in her red high heels until she died. There are other houses down the big hill to the North, including the Heckley’s who live in the old stone school and whose ancestors first came to Pigeon Hill in the 1700s. As you walk or drive up the big hill from the north, the Fontaine and Dalpe Farm horses and cows greet you on your way.

When you arrive back at the T of Guthrie Road, turning west, you will see on ‘the outskirts” of the village the Benjamin Farm and at the next four corners, where St. Armand Road is crossed by Dalpe Rd and Morse’s Line, a building on the north side of Chemin Saint-Armand, that was used as a school up until 1970. The building went through several transformations until it was finally beautifully restored as a B&B by André and Marc.  The building retains it’s school look, and is now named “L’École Buissonnière”.  It is classified with 5 suns (B&B’s use suns instead of stars) and offers tourists a remarkable place to stay. The hosts are warm, the décor is polished and its serves the best breakfasts.

If you walk back eastward to the crest of  Pigeon Hill, past the Royea home on the left (Gayle Heckley, Dave and children), with their beautiful pine trees, you will see another Martin home now covered in cedar shakes and moved 50 feet back from its old location right on the road.  Stephanie and Marc have just added 1 more to the population of the village.

Across Boucher Road (still a little dirt byway) the Gervais live in another historic house, the old Memorial Hall also moved back from the road.  The Gervais’ neighbor Ernistine has seen more changes in Pigeon Hill than almost anyone else here.

On Chemin Saint-Armand, past the church to the East, you will see many homes built over 100 years ago and lovingly preserved. Eric and Rebecca have renovated the old Ross/Doc Martin home. The potters live next door in the old Taylor’s summer home and the “Pigeon Hole” follows which was Mr. Taylor’s antique store, then Rosie and Danielle, the weavers, and before it became José’s summer home, Gissa and Rosemary’s “drop in everything store”. The new gardens around the old Prim merman house, just east of the church, have been created by a well known landscape designer Michel Lambert, now owner of the home with artist\wife Nancy.

If you walk “around the block” on Boucher between Stephanie and Marc and the Gervais, you come to Ernistine and Bob’s (now deceased). Turn right past Ernistine’s and you will come to the art studios created by Michel and Nancy out of Robert Tetrault’s (“call me Bob”) chicken and pig houses.  When you come to Ménard Road, if you turn left, you will come to the Demers home at the end of the road. There you will see a five story high 19the century barn, one of the highest in the Eastern Townships. Turn right and as you come back to Chemin Saint-Armand you pass the Guthrie garage on the right followed by the Old Guthrie Store, now my home, operated  as “Galerie Isle de ’Paradiso’” with recycled “arts and crafts”, photographs on fabric made into pillows, panels and quilts as well as traditional photographic prints.

(To be continued in the next issue)