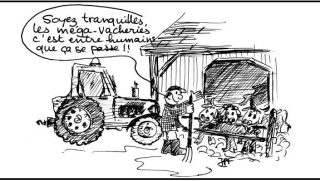 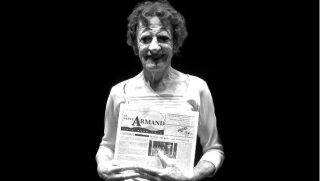 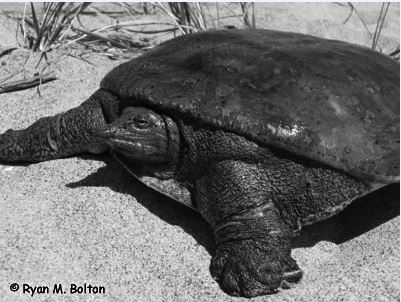 Biologists have discovered a population of Eastern Spiny Softshell Tortoises hibernating in the Mississquoi Bay/Lake Champlain area. This ferocious mannered turtle is an endangered species in Quebec. The Eastern Spiny Softshell Tortoise distinguishes itself from other tortoises by its little trunk-like nose and its scale free shell. The only area where it has been found for the past several years is in the Missisquoi Bay area of Lake Champlain. There is thought to be two other populations of the tortoise in Quebec, one in the Outaouais River west of Hull and another in the water surrounding Ile Perrot and the West Island of Montreal. However since 1990 despite many efforts no one has been able to confirm the presence of the tortoise in those areas. The bay remains the only confirmed nesting site in Quebec.

In June, the female lays approximately twenty eggs which she buries in the sand. Some of the bay beaches are now protected to assure the successful reproduction of the tortoises. The St-Armand Refuge, a site developed by Nature Conservancy, is an area particularly inhabited by the turtles. Each year volunteer citizens, along with members of Conservation Baie Missisquoi, work together to ensure that the nesting areas are clean and protected from predators such as skunks and raccoons. The turtles seem to choose well oxygenated areas for hibernation sites and Conservation Baie Missisquoi has been working toward allowing favorable sites in the Bay for the Eastern Spiny Softshell Tortoises to hibernate. The tortoise hibernates at the bottom of the water from September to April. Other hibernating sites have been located near the Alburg-Swanton Bridge in Vermont.

The Missisquoi Bay Natural Refuge is a nature interpretation site dedicated to protecting the Eastern Spiny Softshell Tortoise. This refuge belongs to Nature Conservancy and is managed by Conservation Baie Missisquoi with the participation of a few residents of Philipsburg Camping including the owner of the campground, Mr. Guy Florent. The refuge’s activities are made possible by the support of Hydro Quebec’s Environmental Foundation.

Public Hearings with the International Joint Commission recently took place and Nathalie Fortin, Louis Hak and Pierre Leduc of CBM presented their case on various subjects regarding the bay including the fate of the tortoises.