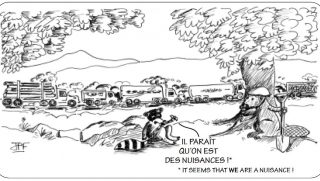 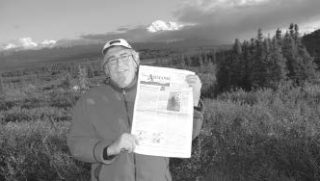 Camping at the base of Mt McKinley in Denali Park, Alaska is a privilege. If you can reserve one of the 28 tent sites, you’re lucky ; and if you’re blessed with a clear day (the mountain is hidden in the clouds two out of every three days) to catch a view of the Great One, then you’re very lucky. I was very lucky ! With a full view of the mountain in the background, I watched a big bull moose grazing a mile away hoping it would eventually come to a near-by pond and give me the close-up photo opportunity I was waiting for. I was so excited when it finally did arrive at the pond that I left my campsite in a hurry….and my father’s hunting knife on the table !

Why anyone would steal a hunting knife in such a friendly environment ? I don’t know. But again, why would a prominent politician jeopardize a promising career by stealing a pair of gloves in a shopping mall ? Material loss is not the major consequence of robbery. The loss of trust in others, suspicion of one’s neighbors, the sudden feeling of vulnerability, and thoughts of violence are much worse.

Marleyne and Jim Hunter, as many others, could not believe what had happened. Marleyne decided to write the following note and post it on the billboard :

Lost, very sentimental knife with a bone handle (a Puma). It was my father’s. Please leave in food locker if found.

“You are so naïve” Jim said to his wife.

The following morning I found the very prominent yellow note on the billboard, and wondered who could have posted it. I went in the food locker and there was the knife. Jim was like a kid on Christmas morning and couldn’t wait for Marleyne to wake up. When she finally did, I came up to her and said : “You’re a genius ! In my state of mind yesterday, I never would have thought to write that note. That was very positive”. Marleyne replied : “Maybe Jim is right, I am probably a bit naïve.” I said, “No, you’re not.” and I showed her the knife. Tears were coursing down our cheeks as we hugged. We had all found more than a hunting knife : we had regained some of the trust in basic human kindness that we had lost the previous day.