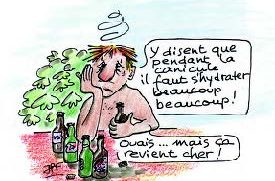 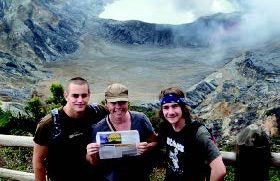 One morning around the middle of May I had a glimpse at a bird I had never seen before. It was in my bird feeder and as soon as the blinds were open it was gone to my neighbour. I thought, maybe I am still asleep. A few days later, I saw the bird again in my feeder. I go get my photo camera, it is gone… the third time, on June 25th, I finally took a picture of the bird through the window ; it is not clear but at least I can prove to myself it is real. I send the picture by email to a friend, he called me back and we dis-cussed. The body looked like that of a male Red Cardinal ; the beak looked like that of a male Red Cardinal but the head : it was black with no feathers.

I submit the picture to two people I know that are knowledgeable on birds. The first one told me that it was a male Red Cardinal in moulting season but a period of one month since my first sight of the bird seemed long. The second told me that it might be a young Red Cardinal that is still growing his adult feathers.

Meanwhile my friend looked on the Internet and found some information on the site of Cornell University1. Here is an excerpt :

« Each year FeederWatchers report several cases of ‘bald-headed birds,’ mostly Blue Jays and Northern Cardinals. One possible explanation for this phenomenon is an abnormal replacement of feathers (molt). Most bald-headed bird reports occur in summer and fall, which are typical molting times. Many of these strange-looking birds may be juveniles undergoing their first prebasic molt, which produces the first winter adult plumage. For some unknown reason, the bald birds may have dropped all of their head feathers at once. Staggered feather replacement is the normal pat-tern.

Other cases of baldness may result from feather mites or lice, or some environmental or nutritional factor. But no one knows for sure, and the condition has not been well studied. Fortunately, new head feathers grow in within a few weeks. »

The picture on this page was taken on June 30th. I saw it again around mid July, it was still bald headed.