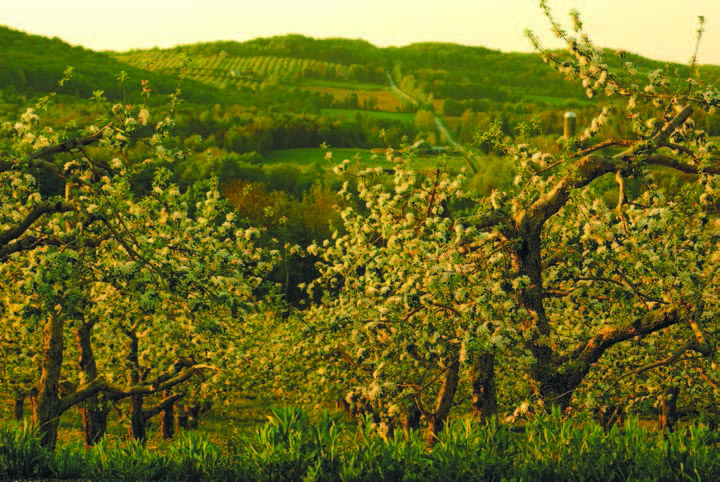 May of 2010 has marked the fifth anniversary of our adoption of St. Armand and the Eastern Townships as our second home. In these five years we have been able to share at least in a small way in the life of this Quebec community. While our foray does not have the glamour of an Under the Tuscan Sun story, nevertheless it is the story of finding a community where we feel at home.

In late summer of 2004, my husband, Tim, and I made a trip north to visit a property that was for sale in St. Armand, Quebec. As residents of Massachusetts, we had run a branch of our business on Nantucket for several years. While we appreciated the beauty of the island, access to it was always governed by the whims of the weather and, at certain times of the year, by the crush of island visitors on the ferries and the jam of cars all making a mad dash for the only two bridges leading to Cape Cod. When we were able to wind down the Nantucket part of the business, we knew we wanted a quiet, far less pretentious, and easier-to-access retreat.

We caught our first glimpse of Missisquoi Bay on a beautiful sunny day in August. Across the Bay glistened the Vermont National Wildlife Refuge, and the southwest vista afforded a view of the Adirondack mountains. The physical beauty all around us was breathtaking. We drove the rural roads and poked around in places like St. Armand center, Pigeon Hill, and Frelighsburg. Having been raised in rural central Canada, I found there was something about the way the roads, farms, and towns were laid out that made me feel right at home. It didn’t take long to figure out we had found the kind of community for which we were looking.

However, it was not to be so easy. When the purchase of that property fell through, we started looking further afield, around Lake Brompton and Lake Brome. But nothing we discovered felt like it fit quite right. So eventually, we put the whole idea on hold. During a trip to Florida that winter, we even considered the merits of buying south rather than north. Late the following spring, we got a call from the sellers of the property we had first seen in St. Armand, saying it was ours after all. We were so excited, and within a few short weeks, we were Quebec homeowners.

Much of that first summer was spent finishing the partially renovated house, but we still found time to go exploring. We are both avid motorcyclists, and we would often ride from late afternoon until dark on weekdays or on weekends. Since then we have accumulated many favorite rides—including the loop through Abercorn, then north, and then back through Dunham ; up the east side of the Richelieu River from St. Jean to Sorel-Tracy and back down the west side ; south along the west side of Lake Champlain to Plattsburgh ; and all the back-roads from Sainte-Hyacinthe to Mystic. We have marveled at the wineries, restaurants, and farm stands and at the abundance of good food and the way Quebec culture values good food.

There have been other very pleasant discoveries as well : we love the access to CBC radio and news of Canada, and we value hearing a non-American perspective on the world ; we love the sense of neighborliness and interaction with our neighbors ; we love the bird sanctuaries and the walking paths ; and we are impressed with how gracious others have been in tolerating our uni-lingualism. We found a world-class zoo tucked away in Granby that in our opinion out-rivals the far better known Seattle Zoo. We’re also pleased that getting here is half the fun : the drive up through Vermont is spectacularly beautiful in any season, and we have yet to experience a single major traffic tie-up on the highway.

One of our great delights has been our ability to share this corner of the world with friends and family. We find our American social circle knows little about Canada and even less about Quebec (most think Quebec = Quebec City). Many have rarely, if ever, been to Canada. We take them to local restaurants, visit local artists on and off the Tour of 20, and visit the gardens, museums, and shops of Montreal. And of course my jazz-loving drummer husband has been proud to host music friends for the Montreal Jazz Festival.

Is it hypocritical then that what we love about St. Armand is that there does not appear to be many people doing what we’re doing—splitting time between two locations ? It is a real place with real people living everyday lives in a real community and not a mecca for developers targeting resort dollars. We like the honesty of a small town in a farming community that knows what it is and is comfortable being what it is. We have no idea what the next five years will bring, but whatever it is, we hope it won’t be radically different from the past five.