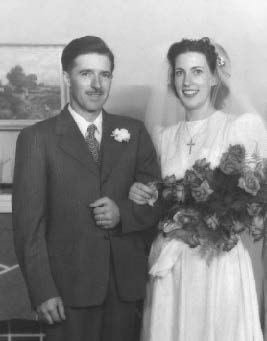 On April 12th, 1913, a nice young lady of twenty years old arrived in the port of Halifax. She had left her native England on a huge ship eight days earlier along with some of her girlfriends from school. Like many others, they looked forward to having a new life with better opportunities here in Canada.

Helena McCarthy was brave and endowed with a strong will. She first established in Montreal. Later, she married and gave birth in 1924 to a little girl named Ena.

Ena went to school in Montreal. One day the widowed Helena came to live in the town of Bedford. This decision was indeed a turning point in her life. Ena adapted very well, made friends and had a happy youth. She started teaching school at the age of seventeen, first at the elementary school in Selby Lake where she spent two years, and later both at Pigeon Hill and Philipsburg. In 1942, at a dance in Dunham, she met a handsome young man who later became her husband.

Royce Chamberlin, at the time, was a soldier home on leave from the army. The couple could only meet each other on rare occasions and then he had to go back to his unit. This was during the war. At one time he was overseas for over a year. They became correspondents for four years. Ena still has those precious letters – over 400 ! Just this last winter, she read each one over again, rediscovering how their friendship changed to the growing love that became so deeply rooted between them.

Our lovers got married in 1946 in St-Paul’s Church in Philipsburg. With what they had saved, they were able to make a down payment on a farm on the St-Armand Road. With their horse “Trixie” as their only way of getting about, the couple arrived at their new farm during a snow storm on October 1st 1946. This was an adventure in itself. They had no money. What they did have was a lot of love and great determination, and with that came he rest : the farm, one set of horses, a brand new stove, a second-hand kitchen set and a pull-couch as a bed.  The house was very cold, there was no electricity nor telephone, no running water or bathroom, and absolutely no luxuries!In spite of the situation though, Ena never felt they were really poor, because they had no debts, and after all, they had eight dollars left in the bank !

Ena did not really want to leave the town and her friends, but this was the only way they found to earn their living. Luckily as time went by, the more she worked with Royce on the farm, the more she liked it ! Yet, the beginnings were very difficult and without the help of her mother Helena, who was so good and so generous, the beginnings could have been even worse. The land was full of rocks and they had to pick them for years and years. The horses just seemed to know exactly what to do, where to go, when to stop, when to pull, bringing logs etc… they had so much heart ! In 1948 the property was enlarged by the acquisition of an additional farm, right across the road from their own. And one thing they also knew was that being the owner of more than 230 acres of land, including 100 acres of woods, also meant more work !

In 1951 their first son Brent was born. The days were long working in the home and in the barn and fields from early mornings to late at nights.

As the seasons changed, so did the work. Then in 1954 Barry was born and in 1956 a sweet little baby girl named Patricia.  All three children started off going to French school, so within three or four months they spoke two languages.  There was always a lot to be done and as the children grew older, they hardly had time to play.

As soon as they got back f r o m school they would change their clothes and each had their own little jobs ; they simply had no choice. In return, they would go out on Sundays and bring the children for a swim, sometimes for a little trip to the seaside and of course they always went to the Bedford Fair. Taking the cattle down to the fair was a little bit of a vacation in a way.

Farming certainly meant lots of hard work seven days a week – preparing the land, seeding, gardening, haying, harvesting and all of these endless tasks. In the early 1950’s, Royce went to work as a customs officer because they could not make it just with the dairy farm.  In harvest season, neighbors and friends would go from farm to farm to help thresh the grain. Sometimes they would work all night. Haying also was an adventure in itself ! After all this manual work with walking plows and old binders came the purchase of their first tractor, a John Deere. Over time, they were able to acquire all their own equipment. At the beginning, there was a mixed dairy herd, later a herd of registered Jerseys and finally registered Herefords. The Herefords would be brought to fairs and of course became the pride of the family when they returned home with a prized red ribbon. This was a way of life !

There have been two fires on the farm. The first one was in 1956 with the loss of two barns. The second one was in January 1977 in the main house. Luckily, Brent came along and was able to save the main structure, but a big part had to be reconstructed and it was really appreciated to have the help of the community, neighbors and friends !

Royce served on municipal council in Saint-Armand from 1948 through 1965. He was then elected mayor but his term was cut short after two years because of illness.

Royce passed away in 1982….  but still, Ena is well surrounded and glad of what they did. Her fondest memories are when they prepared the cattle and brought them to the fair. Farming was worthwhile because they were all working together, and when she looks back she says : “Yes, I am proud of my children, my six grandchildren, and my three great-grandchildren.”