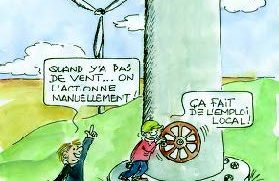 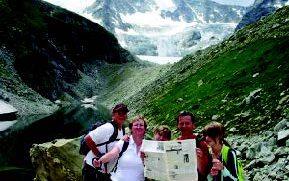 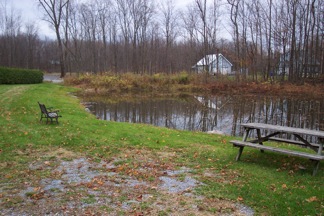 In 1950, when heading south out of Philipsburg on route 7, you would pass through three farms before arriving at the school operated by les Freres de L’Instruction Chretienne.  There was nothing else.

In 1952, Albert Remillard, with his wife Claire and daughter Frances, bought the second farm which had belonged to the Streit family with the intention of being a gentleman farmer raising horses.   Needing a little capital injection, he set out to sell lakefront lots, starting with twenty lots beginning at the southern limit of his property. He laid down a road from the highway and put up a sign for Elmcliff Haven.

The lots were not going to be so easy to sell. South of Philipsburg, steep banks rise up from the beach.  Along much of the frontage, sheer cliffs drop down into the lake.  Anyone wanting a cottage lot with easy access to water, as on the Clarenceville and Venice shore of Missisquoi Bay, would find little appeal in the shoreline south of Philipsburg.  Not all the lakefront was to be privately held.  Mr. Remillard reserved a number of locations for community access to the shore, even though the access was not going to be easy.

Herbert and Margaret Steiche came to Montreal in 1951 with their sons Siegfried, Peter and Dieter. Their origin was Wiesbaden, a small city in southwest Germany.  During the war, Wiesbaden was largely spared by allied bombing raids. But between August 1940 and March 1945, Wiesbaden was attacked by allied bombers on 66 days ; about 18 % of the city’s homes were destroyed and approximately 1,700 people lost their lives.  It was captured in March 1945 by American forces.  The Second World War had left Europe physically and economically devastated. Prospects were bleak and many sought a fresh start overseas.

Bernard Schirdewahn has a very precise memory. He also arrived in Canada in 1951.  On May 14, 1954 he set by car from Montreal with his brother Eckhard, Mr. Kubatz and Herbert Steiche, looking for land.  Their first view of Missisquoi Bay was from Jamieson’s Point and looking across they could see the unsettled eastern shore of the bay. There they found the sign for Elmcliff Haven  advertising lots for sale. They saw, they delighted and on Thursday the 19th they had signed offers for lakefront lots accepted by Albert Remillard’s land development company.

These men came from a world where lakefront property which had never been built upon simply did not exist. In their mind, what an opportunity. They came from a tradition where families had long-standing attachments to homes and communities and they wanted a place to put down roots.  This would be their land, this is Canada and no one could kick them out.

It started with three households of German origin and one Estonian. They told  friends and soon there was a collection of families, not all German. It became a European village.

None of them had money ; they lived in modest apartments in Montreal. Mr. Remillard let them pay overtime and for some it was occasionally a struggle to make the monthly payment. Building anything substantial was beyond their means. Ziggy Steiche tells about the family arriving from Montreal one evening in the rain.  Instead of pitching tents, they took shelter for the night in a shed they had seen on the Remillard property.  Mr. Remillard was understanding when he discovered the occupants ;  a deal was struck for the Steiche family to buy the shed and haul it to their lot.  They would lay out a loft in the rafters as sleeping quarters and this would be their weekend and holiday refuge until they could afford to build a real home. The house was built over 3 summers starting in 1960 using their own hands and paid help from Elmer Schmidt. In the early days, meals were cooked over an outdoor fire. Every weekend was an adventure recollected as being great fun.

The terrain was not ready made for construction.  Bernard Schirdewahn recalls he needed hundreds of truckloads of crushed stone on his property.

Mr. Remillard was more than simply the vendor.  He saw himself in a regal role in his domain. Attired in riding britches, knee-high riding boots and a cowboy hat he would tour the community on the back of his magnificent palomino.  Those who were then children recall he had a young helper named Alain who helped out in the stable ; the children called him Tarzan on account of his body-builder physique. Tarzan was known to bring a saddled white horse to the community swings and let each child in turn ride the horse to the Lette property and back.

For the children, there was much adventure with their friends, both from the immediate neighbourhood and Philipsburg.  Ziggy, with friends Chris Schachinger, Philippe Lette, Cajo Brando and Peter Montgomery found a stash of building materials from which they pilfered scraps to build a shack on a rook outcrop behind the pond.  The location was kept secret from enquiring younger brothers but they were discovered by Mr. Remillard who forgave them for the materials they had taken, admiring the outcome of their labours.

A summer highlight was the Summerfest.  During the afternoon, there would be field games and treats for the children in a great carnival spirit.  The evening was a great outdoor party attended by hundreds from both the immediate neighbourhood, and circles of friends from Philipsburg and Montreal. Tables and chairs were borrowed from the Legion and the churches.  It was a party of the best tradition with singing, dancing and fireworks.

A sign of the community initiative and inventiveness, one household, being the owner of a movie camera undertook to dress the children in costumes, teach them their lines and film the story of the Wolf and the Seven Goats.  Everyone got a part.

Thus are the origins of what was was known early on as Remillards and later the German settlement and now La Falaise.