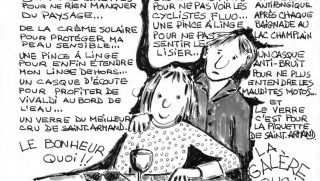 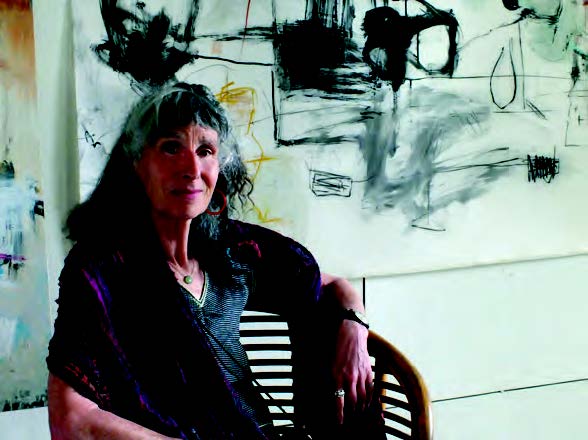 The art of improvisation is what comes to mind when I think of Vicki Tansey. I tell her this as we settle our chairs to face each other, and begin our conversation on the porch of her lovely home. The property with its large barn/studio is located in Frelighsburg down a long dirt lane. We are surrounded by gardens and trees. To the left of where we are sitting, a pink magnolia is in full bloom. The air is sweet with the scent of spring blossoms. Behind the house is a large swimming pond, an inviting peaceful place for morning meditation which is part of Vicki’s Buddhist practice.

She immediately puts me at ease with her warm laughter. I sense she is ready to talk about anything and everything. But where to start ? What aspect of her art or her life would I like to discuss ? This is a challenge because she is like a Renaissance woman, a multifaceted, multidisciplinary artist, writer, performer, singer, Buddhist and dedicated teacher who has taught at Concordia University and the Visual Arts Center in Montreal for over 35 years.

She agrees that improvisation is what matters most to her, she identifies it as the “core to everything”. When she was 18, her father inadvertently planted that seed when he asked her what is your 5 year plan ?’ Five year plan ? Huh ? She didn’t have one and immediately realized she didn’t want one.  “Improvisation is like a practice, a lifelong practice, and it is very compatible with my practice as a Buddhist which is about Presence.” The studio and the stage are sacred spaces, containers for the art-making process. “Something happens to you the minute you walk into a sacred space, it already elicits something from you that, for instance, walking into a grocery store does not”.

That particular quality of presence, of attentiveness, is closer and more attainable in those moments. “Of course, the philosophical Buddhist ideal would be to have it happen all the time – unfortunately we are always loosing it , finding it and then loosing it again. But that is also the beauty of it, and why it is a practice. I see it as an art form.”

The meditational Buddhist path and improvisational artist/dancer path converged early on.  All aspects of her art, spirituality and life were becoming connected and nourished by these practices. At one point, she became interested in the invisible, the space in between things. She used an example : “When the dancer gets ready to do the big leap, the getting ready part of it is hardly noticed but the big leap is an aha ! moment. We focus on those moments of clarity and agree not notice the others, or see them as a preparation or a recovery – not equal in importance. And I thought that is not the way it is – I am just as present in my body during these other moments in between.  So, how do I do an art that acknowledges everything, and not just certain parts ?”.

She often brings this question to her art students : “How do we see ?” Asks them to notice things for a week and then report back.  Discuss their experience. The exercise allows them to understand that most of us have an intensely developed sense of editing, preference and judgment. What is beautiful, what is not. The point is to become aware of how we see and then find a way to open up and include more.  She is inspired by David Hockney’s description of a tree in winter : “without the weight and distraction of its leaves, the tree is more open, stretching upwards ; its lines are clear and powerful, a distilled aspect of itself. In November everything is revealed, stripped bare. The underlying structures and shapes take on another kind of beauty.  The bright colour of summer is gone – but there are those ambers and those darks, the brilliant green of the mosses”.

1966, when she was 22 years old, Vicki participated in the first “Happening” to occur in Montreal. She was the only dancer, and it was the first time she would perform with artists from other disciplines. It was an improvisation…of course ! One of the artists was Roy Kiyooka. He became a mentor and was instrumental in changing her life.  He was teaching at Concordia in the Fine Arts department, an artist who began as a painter and sculptor, then moved toward poetry, photography, video, film, and music. As Vicki grew older, her involvement with dance and voice work continued but she also began – as she said- “leaking paintings”. Up until that infamous “Happening”, Vicki had seen herself exclusively as a dancer. Now, that was starting to change. Often she would hear Roy Kiyooka triumphantly declare : “When I make art, I never know what I am doing !”. He saw no problem with doing many arts. She had been keeping those other pas sions, the writing and painting, to the side because she thought you had to choose : “do one thing to do it well”. Roy challenged that assumption : “Why ? If you love to do something, then do it.”

Even with Roy’s supportive influence, there was still a feeling of fragmentation. Enter Peter Heller. He was a painter Vicki admired greatly, he died about 10 years ago. They would have passionate conversations of the fist smashing table, spit flying, philosophical and political variety. He advised her to find a way to bring all the disciplines together, to stop thinking of them as separate art practices. His words lodged themselves somewhere in the back of her mind. Sometime later, she began creating theater pieces that incorporated her visual artwork, dance and movement, script, sound…it had it all. Everything. There was a sudden moment of : “oh right…so that’s what he meant !”

But traversing difficult periods of doubt informed her, and when she in turn found her vocation as a teacher, gave her the insight she would need to guide her students : “When you step into a creative process there is an awkwardness…a search. Don’t try to explain it – period. Don’t share it.  Don’t try to defend it. You don’t have to know what it is right away. That uncomfortable place of “not knowing’ is a fragile, powerful, potent place that can be easily sabotaged. Trust it, be friends with yourself and protect it.  You need space, space around the act”. 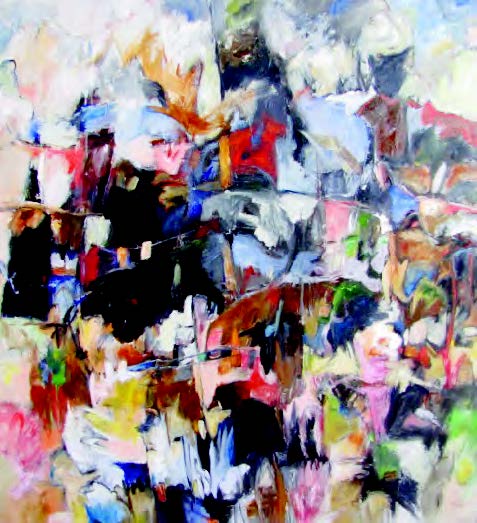 “A woman once said to me : I am an artist because it is my way of justifying solitude. “ We laugh…but it is true, if you want to be an artist you have to like being alone. And that time in between even if it seems like you are doing nothing but daydreaming, is not irrelevant – it feeds into the work.

“The layers are always moving”, Vicki says. “I feel like I have started a new life, that I have been born into a new life. It is a revelation and I am so grateful. I am reassessing and redefining what I want the rest of my life to be like.” And for Vicki this has to happen in the moment, breath to breath as one breath leads to another, just as one thing leads to another, and on and on.  She honours it all. Every bit. Sadness and suffering ; joy and surprise ; the endless fascination for what will happen next.

“And it is the art, whatever language it is, that distils what you are living”.

One stormy evening last summer, 2012 –  Vicki  is about to perform an improvisational piece with two musical collaborators in her studio. High winds have blown the power out and flickering lanterns have been positioned to light the performance area. “I know it is very dark but don’t worry”, Vicki is saying, her edges lit with incandescent orange. “You will see us”.

The audience is hushed in anticipation. Jean raises his violin, and Emilie, seated beside him, tucks her cello between her knees and hovers the bow over the strings…

For info or to be on her mailing list : vickitansey@gmail.com (bilingual workshops offered : voice and movement improvisation ; painting and drawing workshops / upcoming exhibitions and performances)