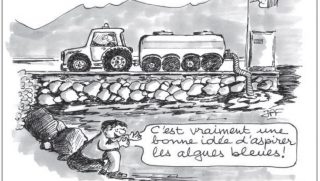 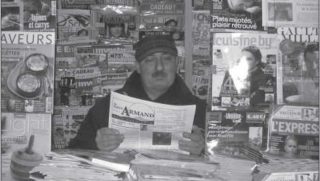 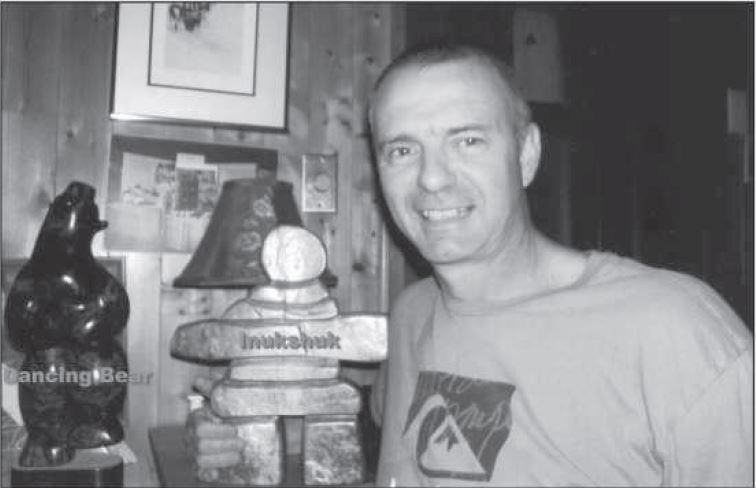 Ross Pakrinson, a local sculptor, was born August 1, 1958 in Blair Gowerie, Scotland. The Parkinson family came to Canada in the spring of 1966, spending time in both the Maritimes and Ontario before settling in Quebec.

Ross’ father Mark always had an interest in carving wood. In the early 70’s, a family friend introduced Mark and Ross to soap­stone, and a business blossomed.

Upon completion of high school, Ross joined his father in the business and they worked together until Mark’s retirement in 2004. Ross maintains « The Parkinson Family Studio » in St. Armand near Lake Champlain where some of his sculptures are always on display.

I had a chance to ask Ross some questions about his career, inspirations, etc.

PW : Have you always bad an interest in art ?

RP : Not as such, it just happened that a friend of the family, Emil Socher, who was working at a gift shop by the border (Canada/US), brought us some pieces of soapstone and asked if my father and I would like to try carving stone like the Inuit do. Within a three-month period, it went from a hobby to a fledgling business as people encouraged us by their interest, and a desire to purchase what we made. It was a learning process from that point on.

Did you study art in school ?

Actually no, I graduated from high school in 1975, and was an apprentice in a pottery, working for Greg Keith here in St-Armand. I guess that is where I first developed an interest in creating art. It was during that time that I tried carving stone, and something just clicked. It was within that first year that my father decided to leave his job in Montreal to pursue sculpting full time. I quit what I was doing and joined him, and we were both doing it full time.

Do people associate soapstone sculpture with a particular style or theme ?

I guess it’s a stone that lends itself well to a northern theme. Soapstone is found all over the world, but people seem to think that it’s just a Northern Canadian thing. It’s so well known as a Native theme, that’s why I follow that style, l’m not trying to reproduce any mythological beliefs the Inuit have, it’s just my interpretation of life in the north, or at least the way it used to be. There are no more dog sleds ; it’s snowmobiles and guns instead of harpoons. I try to stay in the older times.

How does soapstone differ from other mediums, such as wood ?

There are certain similar­ities between wood and soapstone. Soapstone does have a grain similar to wood ; it can fracture more easily, so you have to be able to .read the stone, to be able to carve it efficiently. Soapstone is a metamorphic rock, which means it’s in the process of change. If it was left in the ground for another 500,000 years it would become serpentine, and another 500,000 to a million years it would become marble, soapstone is like baby marble, but it’s way on the soft end of the spectrum. Marble is per­haps 4 or 5 on the hardness scale, soapstone is 1 .5, dia­mond is 10.

What would be the origin of the name soapstone ? Soapstone is a generic name given to any stone soft enough to carve that contains mica. Mica is a natural lubricant, so when you’re rubbing mica against itself it gives off a greasy or soapy feeling, hence the name soapstone ».

Do you ever work in styles that might be considered non-traditional ?

Yes I do, but the demand and what sells well is the Northern theme.

What would be an example of a non-traditional piece ?

When customers have asked, I’ve made turtles, dogs, penguins, burial urns, whatever anybody would ask for I would attempt to do.

What would be your inspiration for a new piece, something unique to you ?

Inspiration can come in really strange disguises, it can be just having a really good day, or it can be something you see in nature, a line, a shape, a form, and all of a sudden it clicks in your mind. Perhaps not right away, sometimes these things have to develop, and when they are ready to come out, that is when they come out.

Since the beginning of his career, Ross has shown his work at art shows. Every year before Christmas, he has a booth at the « One of a Kind Show » in Toronto. This is considered to be the most prestigious art show in Canada, to be accepted in the show is a reflection of artistic skill.

In 1983, Pierre Elliot Trudeau presented Princess Diana and Prince Charles with a sculpture created by Ross as a wedding present.